Edinburgh 2019
Flight of the Conchords

Flight of the Conchords 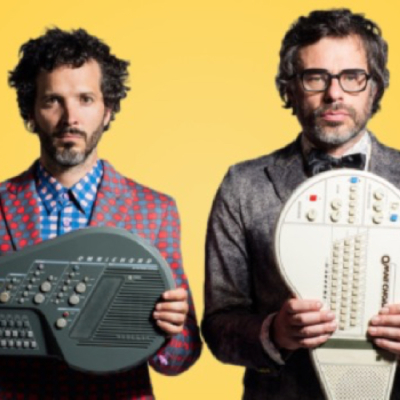 Flight of the Conchords is a Grammy-winning musical comedy duo composed of Bret McKenzie and Jemaine Clement.

In 2005, Bret and Jemaine received an invitation to perform at the Aspen Comedy Festival, in Colorado, USA. Against tradition they left New Zealand’s summer to go to the northern hemisphere’s winter and were shocked by the snow when they stepped off the plane in t-shirts and jandles. The HBO executives liked their act and asked them to film a half hour performance for a stand-up comedy show called One Night Stand.

The HBO sitcom became a hit. This, along with the praise for the subsequent album releases (on Sub Pop Records) and the duo’s live show, was the comedic hat trick that catapulted Flight of the Conchords to international sensations.

The Conchords would also see major success individually. Jemaine lent his voice to the character Nigel the cockatoo in the Rio films (2011 and 2014).  He was cast as “Boris The Animal” in Men in Black 3 (2012). Jemaine also wrote, produced and starred in a variety of projects including the acclaimed Vampire comedy film, What We Do In the Shadows, and People Places Things. More recently, he joined the cast of The BFG, the Steven Spielberg adaptation of the Roald Dahl book, as the giant named Fleshlumpeater.

Bret has also been hard at work writing and acting for various television and film projects. Most notably The Muppets (2011) and Muppets Most Wanted (2014), the former of which won him an Academy Award for “Best Original Song” for the power ballad “Man or Muppet”. In 2012 he starred in the New Zealand black comedy Two Little Boys and then in 2013 he was cast in Jerusha Hess’s romantic comedy Austenland. He is currently writing the screenplay and songs for a film adaption of Neil Gaiman’s book Fortunately the Milk as well as penning tunes for the upcoming Disney film Bob the Musical.

And somehow, between all of the film and TV work, the Conchords managed to co-headline the “Oddball Comedy & Curiosity Festival” alongside Dave Chappelle in 2013.

In 2016, Jemaine and Bret announced the wildly successful The Flight of the Conchords sing Flight of the Conchords Tour. The duo premiered new material alongside fan favorites, and quickly sold out amphitheatres and concert halls across the U.S. Also that year, the duo headlined Tenacious D’s Festival Supreme in Los Angeles. The tour came to the UK and Ireland in 2018, their first UK shows in seven years. The tour sold out arenas countrywide and ended with a four-night run at London’s Eventim Apollo in Hammersmith, one of which was filmed and released as special on HBO, entitled Flight Of The Conchords: Live In London.

On the road #tbt pic.twitter.com/QMIRX7cwx2

From the archive #TBT pic.twitter.com/DspRK6pyqu